A single Google Image search of the word ‘prostitution’ presents us with long legs, high heels, lacy underwear and fishnet tights. In other words, images of provocatively dressed women leaning into car windows to secure their next client. Unfortunately, this would also be the image that springs to most minds.

Through her documentary photography project Gentlemen’s Club, Spanish-born photographer Cristina de Middel aims to revert these stereotypes. This series portrays men who visit prostitutes in Rio de Janeiro, Brazil, photographed in a brothel just around the corner from Praça Mauá, one of the city centre’s main landmarks.

In 2015, Middel placed an advertisement in a local newspaper, calling for men who regularly visited prostitutes to share their experiences with her, offering various sums of money in return, according to how much information they were willing to share. Such a gesture was aimed at reverting the usual financial exchange between female prostitutes who receive money from men in return for sex.

From the tender ages of 11 to 19, when they first began visiting prostitutes; Charles, Luis, Daniel and Felipe paid and still pay between 8 and 18 GBP per session for visits of up to 3 times a week. Mostly claiming that they enjoy it because of the pleasure and lack of commitment involved, only one man stated that loneliness was his main motive behind visiting the brothel.

“This is the other half of the business of prostitution. Look through all the projects, reportage and documentary series about prostitution, 99.9% of the time it is women naked in dirty rooms. That’s how you explain a business that is far more complex than female nudity?” explained Middel, in an interview with Huck Magazine.

Confronted with the four exhibited photographs, I felt that the need to re-address gender imbalance in the stereotypes that categorise the prostitution industry is particularly important in Brazil: a country where women are often highly sexualised by national media. Coincidentally, it is also a country where media frequently colours what is eventually seen by the public. As a former photojournalist, this rebalancing is, after all, the essence of Middel’s work. In her own words, “if it’s at all even possible to change the world with a photograph, it certainly won’t be in a newspaper”. 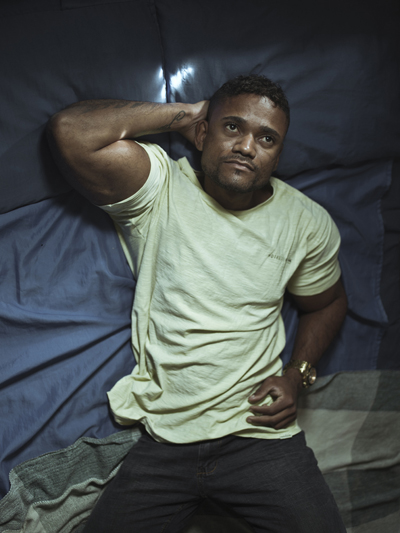 IN FOCUS and The Taylor Wessing Photographic Portrait Prize exhibition will be on display at the National Portrait Gallery until the 26th February 2017. For more information, click here.

Quotes from Huck Magazine and Vice.