In celebration of their fourth birthday, on Saturday 29th September Bristol-based Worm Disco Club collaborated with Manana//Cuba to transform Bedminster venue Fiddlers and to bless Bristol with a night of musical mastery. Bristolatino’s Chloe Budd reports.

The evening opened with Bristol’s own 8-piece instrumental group Tezeta, hailing from local musical collective ‘Bloom’. Taking their name from the Ethiopian word for nostalgia, their musical project reveals a melting pot of influences, offering an intersection between jazz, afrobeat and improvisation which very much established the tone for the genre-bending musical performance that would follow. Following a short interlude where Worm Disco Club’s DJs spun their signature colourful selection of records spanning from Colombia to Congo, via just about everywhere in between, the audience were gifted with the final, headline performance from Ariwo.

Based in London yet incorporating sounds from much further afield, Ariwo was formed in 2015 by Iranian sound artist Pouya Ehsaei, Cuban percussionists Hammadi Valdes and Oreste Noda, and Cuban trumpeter Yelfris Valdes. As a musical project, Ariwo premiered their sound as part of an online Boiler Room session before taking to the stage at Manana electronic music festival in Santiago de Cuba in 2016, alongside the likes of Nicolas Jaar and Quantic. Manana//Cuba has now progressed from a festival into a record label, but their philosophy remains the same: to bridge the global and cultural gap between electronic music and Afro-Cuban folkloric sounds. 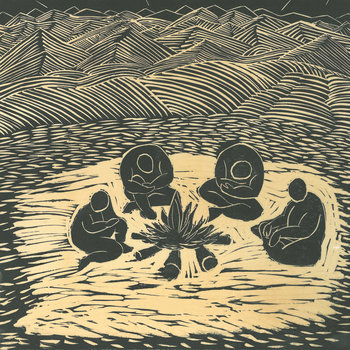 Ariwo seems to epitomise this mission, as we witness Pouya Ehsaei underscoring, sampling and embellishing the live Cuban percussion to offer an amalgamation of sounds drawn from diverse cultures, yet crucially maintaining an improvisational quality to the performance.

Taking to Fiddlers’ stage just after midnight, Ariwo’s performance unfolded as a complex and multilayered process, oscillating between electronic rhythmic loops and powerful trumpet solos, effortlessly growing and seamlessly retreating in intensity, tone and volume. Their sound presented something darker and more challenging than Worm Disco Club’s usual musical offerings. The unpredictable fusion of influences sometimes made it difficult to know how best to dance, yet the performance was met by a particularly responsive and meditative audience that were left transfixed. Worm Disco Club’s trademark visual projections framing the band perfectly complemented the performance, contributing to the creation of a multi sensory, evocative soundscape. From their music to their underlying mission, Ariwo offer something new and important to audiences, something that questions the limits of both electronic and ancestral music in an intense, yet enticing performance.

Ariwo’s latest single ‘Pyramid’ is out now and they plan to release their first album later this year. Manana//Cuba present their next show this Sunday October 21st at The Pickle Factory, London. Worm Disco Club present ‘Sons of Kemet’ at The Fleece on October 29th.