Alborada screened ‘Amazon Voices’, a documentary about oil extraction in the Ecuadorian Amazon and its effect upon indigenous communities, at Goldsmiths, University of London. BristoLatino’s Editor-in-Chief Sophie Foggin was there.

Sumak Kawsay, the Kichwa expression for ‘good living’, involves living in harmony within one’s community and taking care of the madre tierra. It is this principle that the indigenous peoples of Ecuador live by, in line with their desire to be isolated from the industrialised world. They argue that they are not poor, but instead rich in biodiversity, food and culture. However, as one resident of the Sarakayu community summed up, “if they destroy the Amazon, there will be no Sumak Kawsay”. In ‘Amazon Voices’, director Lamia Chraibi follows the stories of several Ecuadorian indigenous communities that have suffered at the expense of oil extraction, despite their efforts to stop exploitation of the land.

Dubbed the ‘Rainforest Chernobyl’, perhaps the worst example of the disastrous effects of resource extraction occurred in the Cofán Dureno indigenous community, in Lago Agrio, Northern Ecuador. In 1964, the oil giant Texaco, owned now by parent company Chevron, began drilling wells in Lago Agrio to extract crude oil from the ground. At this time, neither the indigenous communities nor the government could predict the consequences, and so the ‘gringo’ workers were largely ignored. The company operated in the Ecuadorian Amazon for 25 years. Meanwhile, unbeknown to the Cofán Dureno people, around 30 billion gallons of oil and toxic residues were being poured into the rivers, polluting approximately 1500 square miles of land. As a solution, Texaco opted to set fire to the spillage. The remains: charred black coal that can be found just under the surface of the ground, and oily waters thick with petroleum, in place of sources that used to provide drinking water. At the time, Chevron Vice President Ricardo Reis Veiga ruled these waters “fit for human consumption” and Texaco workers suggested that the oily water could provide a useful cure for rheumatism. The situation remains unresolved to this day, and lawyers still continue the fight for the health care and clean water that was promised in the $10 billion judgement that was won against Texaco as a result. 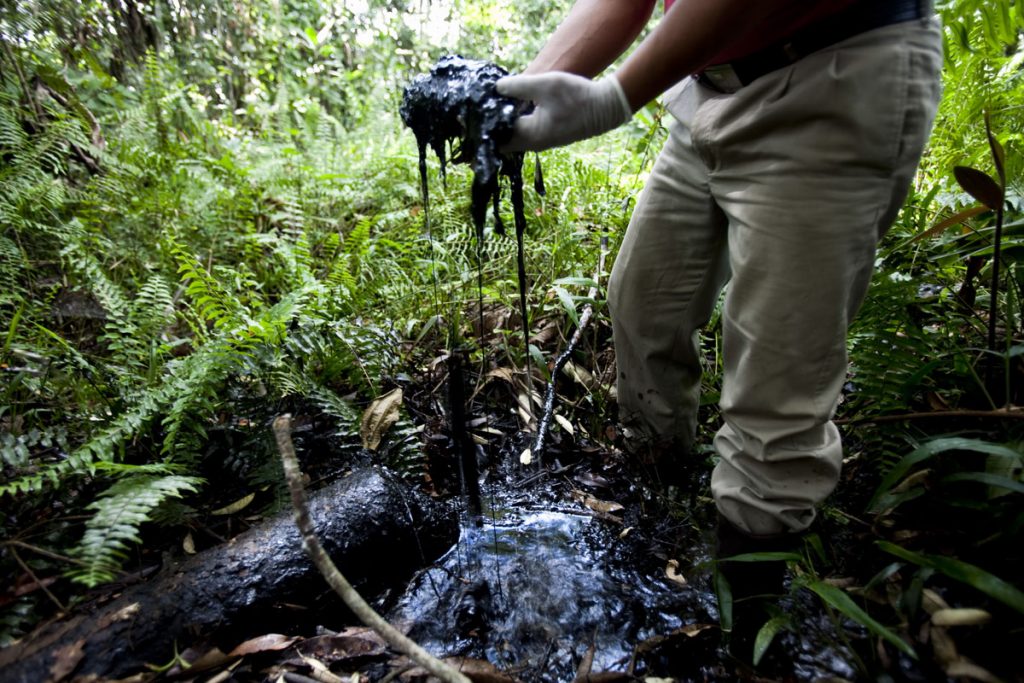 In 2002, the Argentinian oil company CGC arrived to Sarayaku territory in Southern Ecuador in search of petroleum, having been granted 200,000 hectares of land by the Ecuadorian government for oil exploration in 1996. The Sarayaku residents, who had received no prior warning, were understandably alarmed at the unwelcome armed workers who had arrived by helicopter into their community. Cries of “respect our territory” and “get out of here” echoed in protest from the Sarayuku people, who were unwilling to allow the exploitation of their fragile rainforest habitat. In the years that followed, believing petroleum extraction in Sarayaku territory to be a crime of ethnocide, Sarayaku leaders filed a lawsuit against the Ecuadorian Government, which was taken to the Inter-American Court of Human Rights in 2011. For not having alerted residents of the planned oil extraction, the State subsequently publicly apologised, declaring its responsibility for the violation of Sarayaku Human Rights and granted them $1.5 million in compensation. However, the people’s struggle for autonomy continues, as more recently they are currently being threatened by Andes Petroleum, an Ecuadorian consortium of two state-run Chinese oil firms SINOPEC (China Petrochemical Corporation) and CNPC (Chinese National Petroleum Company). In 2016, leaders of the Sarayaku released a statement condemning the proposals to begin drilling for oil in their territory again:

“We condemn and reject the government’s attempts to divide the communities in the proposed oil blocks, which cause conflict between indigenous peoples and is in violation of the judgment it lost. Oil exploitation in our territory would destroy our way of life and the living forest, the harmony between plants, animals, our people, and our ancestors’ spirits.” 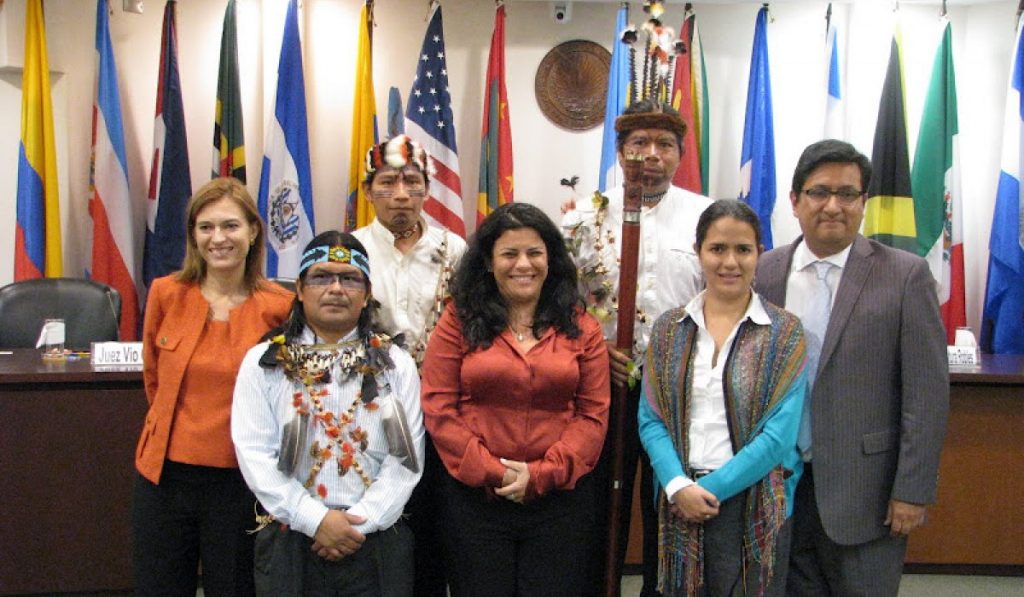 Leaders of the Sarayaku community with their lawyers.

In 2007, Ecuadorian president Rafael Correa pledged to incorporate the Rights of Nature into government policy, and in 2008, Ecuador became the first country in the world to codify this, in Article 71 of the National Constitution. He proposed the Yasuní-ITT Initiative: a potential solution to the threat of crude oil extraction in the Yasuní National Park, home to the country’s largest area of biodiversity and, unfortunately, 20% of all national crude oil resources. Pledging to prevent the emission of 410 tonnes of CO2 gas into the atmosphere, this initiative asked for financial contribution from the international community, to support sustainable energy and economic development (of which $350 million per year was required to fund the initiative) in return for the protection of biodiversity and the homes of the Tagaeri and Taromenane indigenous peoples who reside in Yasuní National Park. However, in August 2013, Correa abandoned the initiative due to lack of funding, and approved oil drilling, blaming the international community for their lack of support. 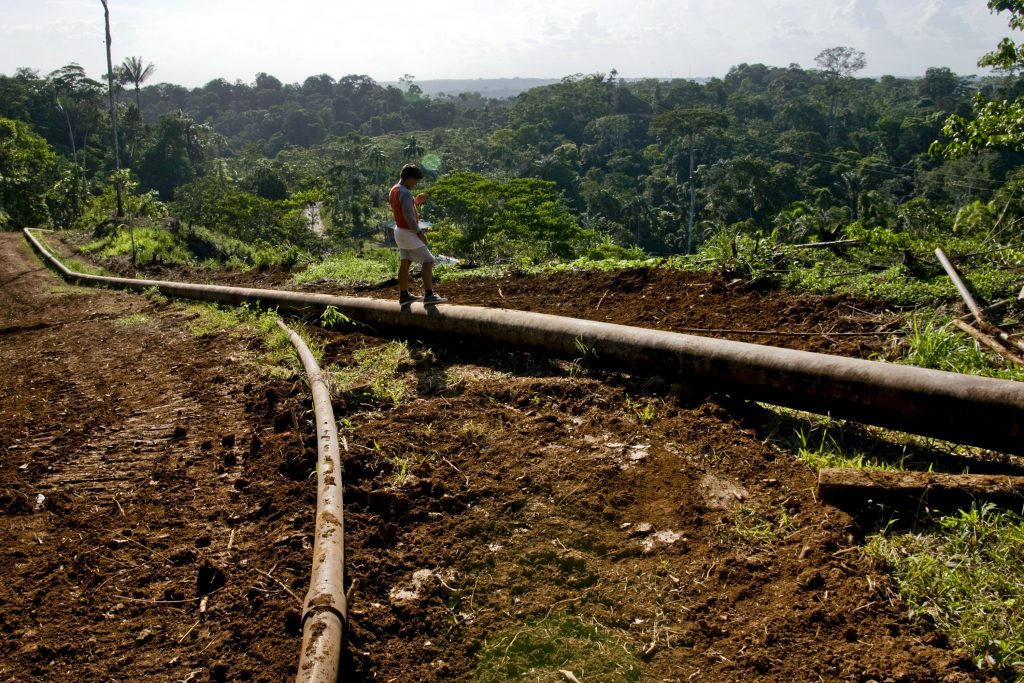 A young boy stands on an oil pipeline in Yasuní National Park, Ecuador.

Despite forceful protests from indigenous peoples in the country’s capital, Quito, Correa’s decision to back down on his promise to protect Ecuador’s rich biodiversity, along with a general lack of governmental support for indigenous rights, has continued to anger Ecuadorian citizens. In 2012, these communities marched for 10 days from the Zamora Chinchipe province in the Amazon to Quito itself, in a protest organised by the CONAIE (Confederation of Indigenous Nationalities of Ecuador), drawing the attention and support of the civil society in their fight to protect their territory.

“The Yasuní is not for sale, it should be respected and defended!” chanted the protestors. 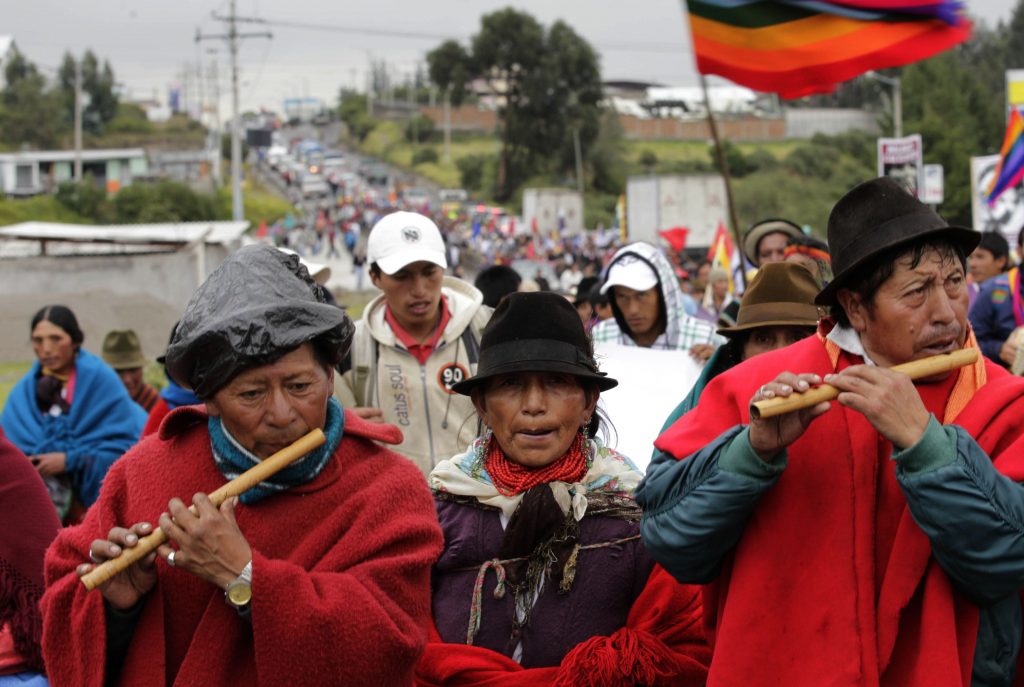 In 2015, an ‘Uprising and National Strike’ was proposed by CONAIE and other organisations, following proposed amendments to the Ecuadorian constitution which would allow Correa to be re-elected once his third term expires this year. Thousands of Ecuadorians gathered on several occasions in the capital to show their discontent.

This year, concerns were raised by Acción Ecológica over the Chinese-run copper development project Panantza-San Carlos, that threatens the Shuar indigenous community, who live at the headwaters of the Marañón river. As a result, the Ecuadorian Government made an effort to shut down Acción Ecológica, the principle NGO defender of indigenous rights, that does, notably, receive funding and support from US NGO, Amazon Watch. However, these efforts have not prevailed and have subsequently received criticism from UN Human Rights Experts. 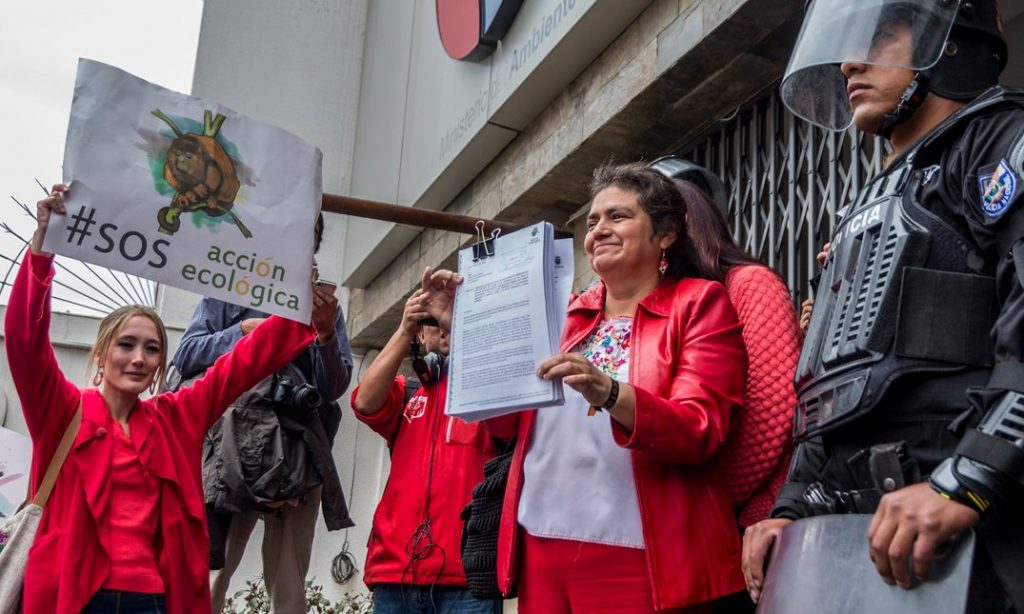 NGO Acción Ecológica is saved from being shut down.

It therefore seems that Ecuador, dubbed “a pioneer of indigenous rights movements” by ‘Amazon Voices’ director Lamia Chraibi, is still very much struggling to meet the demands of indigenous communities, and to protect the richness of its own biodiversity.