Born in Lima, Peru but currently based in New York, Maria Chavez is an improvisational and experimental sound artist, turntablist, DJ and author of the book, Of Technique: Chance Procedures on Turntable. Following Chavez’s recent Bristol performance, Bristolatino’s Chloe Budd caught up with her via email.

When asked beforehand what the audience could expect from her performance at  The Brunswick Club in St Pauls on Wednesday 14th November, Maria Chavez responded “I have no idea. I’ll be there. So just expect a brown girl with long brown hair and some broken records and my double headed needle”. This innovative and open-ended approach to performance quickly became clear in Chavez’s Bristol headline slot, initially inviting her audience to move as close to her as possible and encouraging them to put a camera to her face if they wish.

In an opening that resembled a storytelling session, Chavez explained how she was gifted one of her trademark tools of performance: the double-headed turntable needle. As Chavez alternated between this double-headed needle and the more commonly used single-headed stylus throughout her performance, she encouraged the audience’s interruptions or queries, and offered clarifications as to her specific techniques, offering the audience an instructive and thought-provoking experience that broke down the familiar boundaries between performer, performance and audience. Chavez paused to pose challenging questions such as “What is art without humour?” and “Is being shy a personality trait or is it just a result of the patriarchy?” which offered an insight into her motivations as a performer and openly lent themselves to an active engagement from the audience.

The audience quickly grew comfortable with this unfamiliar mode of performance, eagerly accepting Chavez’s invitations, gradually growing more inclined to raise confusions or questions and moving themselves physically closer to Chavez and her turntable to see her hands at work and fully appreciate the visual element of her practice. 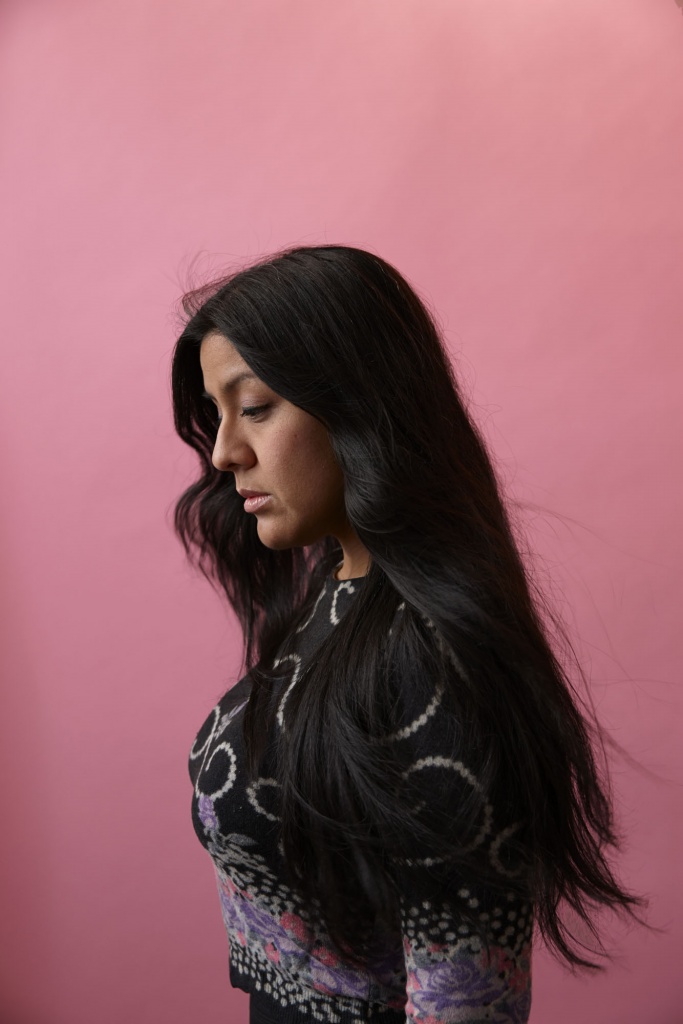 For all her evidently far-reaching talents and achievements, Chavez remained refreshingly humble and demonstrated a genuine interest in listening to her audience, even pausing at one particular moment to ask for an audience members’ name.  We caught up with her to discuss her childhood, her approach to performance and her reception.

What were your first memorable encounters with sound or music as a child?

Well, that’s actually a funny story. I was born with water in my ears but the doctors in Lima couldn’t figure it out and thought I was deaf or a mute because I wasn’t responding to people when they called for me. Except for my father, according to him. When my mother immigrated to the US with my brother and I, she immediately took me to the doctors in Austin and they discovered the water and removed it. So I heard my first sound when I was 3 and it’s my first memory.

Can you remember your first encounter with a turntable?

Well, I’m almost 40 years old so when I was 5 my family had a hifi record and cassette player and a radio sound system.  I was in charge of flipping the record over in the household and went on to make little mix tapes of my favourite songs for me to listen to later. I’d also make tape letters to my mom because she travelled a lot for work when I was young. Little did I know that I was DJing. It didn’t really dawn on me that this was what I was doing until a couple years ago – a funny coincidence.

How and why did you transition from DJ to a sound artist?

I assure you that it was not a choice! The boys in the Houston techno scene hated my experiments with the turntable and kicked me out of the scene. In fact, I just DJ’d in Houston again this past spring after 17 years of being kicked out and not being invited back.

It was so lonely, being pushed out of a scene where I was the only girl. During that time I began getting serious about the avant garde but as a college drop out, in the process of getting a technical degree in Audio Engineering, I discovered David Dove and the Pauline Oliveros foundation. They took my experiments with the turntable in a different way and that meant a lot to me. Dave taught me everything I know about Pauline, sound, everything. I’m sad that all the boys that kicked me out are nowhere to be found now. I’m very grateful to them and their strong rejection of me and my work and wish I could thank them. Without their shortsighted views, I would not be who I am today. I owe them a lot.

What especially excited you about the turntable? How did the turntable end up being your main tool of performance?

It was not a choice – I just happened to be a DJ, Dave Dove just happened to invite me to improvise with a group of young musicians and I said,”I’m not a musician, I’m a DJ.” He replied,”Well, bring your turntable and let’s see what happens.” So technically, Dave chose the turntable for me.

And to be totally clear, I don’t just improvise with the turntable. If you look at my body of work you’ll hopefully notice that the focus on the turntable is really just as a tool, not as a passion. I’m not interested in turntablism or turntable art. I find it all to be very cheesy.

Ultimately, my instrument and focus is with chance. Regardless of the medium I’m working with, this is the leading line. Along with creating works that deal directly with the inner ear, conceptual sound art, the inner dialogue, manipulating the mind’s internal perception phenomenon with sound and challenging the sound art community to not be so transfixed on emitted sound as the only means of sound art work is what makes me the most excited.

The turntable is just a tool that helps visually illustrate where the sounds are coming from through improvisation practice. The ability for the audience to see my hands in motion while hearing the sounds in conjunction is what makes it sound art/ sound sculpture and not music. The physical illustration of sound, manually.

I guess that’s why I stuck with the turntable in this way, because it helped to explain my ideas in improvisation and sound art in clearer detail than any other tool. But the passion is with presence, improvisation, chance, the wrong moments and if they can be redeemed as good moments again, and the challenge to express sound art ideas without leaning on one output (emitted sound). This is what I’m passionate for.

Do you notice a difference in the ways in which your performance is received in different places or situations? Are there any audiences that tend to be particularly responsive?

Men get angry really quickly. It’s cute. The consumer market really has a huge hold on them and that’s what I normally discover when they charge up to me on stage to yell at me and tell me what I’m doing is wrong. Patriarchy is rooted in objectivity. And when one’s sense of objectivity is being challenged so much so that it renders a negative reaction, all it’s really doing is explaining to me just where you are in the line of patriarchy and object-ness.

If you’re open to destruction, to objects being allowed to live more than one life then I understand your place within consumerist culture. If it makes you so angry that you send me hate mail and make derogatory comments about me as a human/ woman, then I know that materialism has you by the balls.

Beyond the angry men, everyone else is very sweet. It’s seems to be something people have never seen before and that is interesting to me because I see it all the time! I appreciate all of the honest responses and questions. Ultimately, curiosity wins with all of my performances.

Could you describe the relationship between your work and contemporary art?

As far as a relationship, technically I shouldn’t have one with contemporary art because I’m a college drop out and academia discrimination is rife in the contemporary art market. I show in major museums and have my paintings in permanent collections for institutions but I’ve never been represented by a gallery. I simply did not play the game correctly by not going to art school because I was too busy being an artist.

In a way I prefer it, because I sort of skipped the contemporary art market and went straight into museums, fooling them with a promise of sound installation only to switch it and present work in unexpected mediums.

And just like the rejection from the guys in the DJ scene, I thank the contemporary art market for rejecting me. It’s created new paths that I never knew were possible. I’m very grateful and hope they continue to reject my work forever. 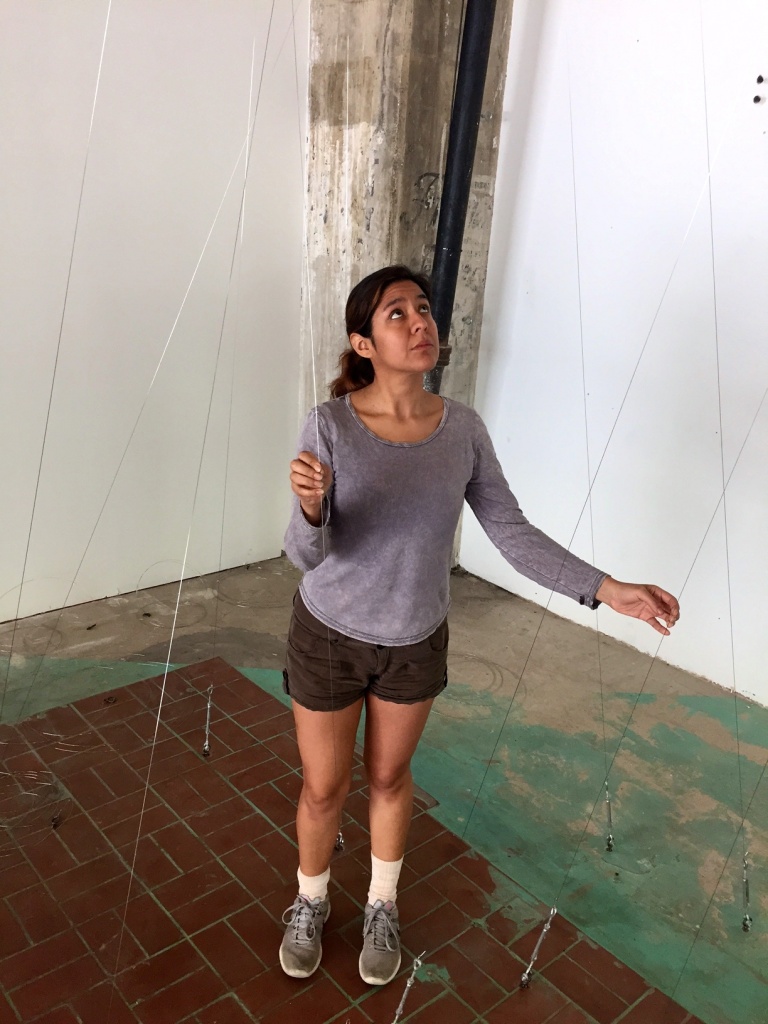 What would you say is the relationship between your sound and the space you perform in? Do you find that the space greatly influences your decisions in terms of what sounds are produced?

The moment influences the performance. And it’s important that people sit as close to me as possible. Totally disregarding the old practice of stage/ performer as genius, audience as other. I hate this mentality and believe it is part of the patriarchy to create this illusion, “because I am up here I am better than ____.” If anything, without the audience, the work doesn’t exist. So it would be more towards a relationship with the audience than the space. The resonance in the space becomes secondary for me in improvisation practice. Still important, but in relationship to space being a deciding factor of the output of the performance, the audience comes first.

Could you describe your process when you approach a performance? Do you arrive with a specific structure of trajectory that you intend to follow?

Never. Nothing is ever expected and I’d hate to expect anything from chance. Talk about failure!

You often emphasise the importance of accidents, coincidence and failures. What role do these play in your performances?

Allowing chance to make the work instead of my own choices helps to detach myself from the work itself. I need that detachment because this work isn’t mine. It’s ours. I hope you all understand that.

Chance is a universal voice that gets ignored regularly because society thrives on predicting the future. From astrology, religion to entertainment. I should also say that I’m also an atheist, so maybe that will help clarify my detachment to these practices that try to predict the future. I hope my performances bring us all together for one short moment so that we can have a conversation with chance, thereby further understanding what I call “The Language of Chance” as a group. Chance is always talking, it’s really up to us if we want to listen to it or not.

What are you currently listening to?

For my DJ practice, that’s a whole other can of worms. I don’t follow labels, if I hear an interesting sonic moment of a track in a club, on the street, in a car, on the internet, I’ll figure out a way to find what it was then fall down the rabbit hole of something new that I otherwise would have never heard before. Everything needs to be organic and not totally by choice. If my work is only guided by my intentions then I’m no longer an artist, I’m simply seeking approval. That approach, to me, is not in line with the importance of evolving as a creative person.