Why Latin America is so much more than plantain, rice and beans

Written by BristoLatino
Posted on March 12, 2016

It is safe to say that Latin America does not have the best culinary reputation. Two ‘foodies’, Victoria Turner and Pete Oldham, travelled across South and Central America in search of a decent meal to recreate for their amigos back home. Below, they describe their favourite 8 destinations and why they offer so much more than the stereotypical Holy Trinity of plantain, rice and beans.

It’s hard to find an article about Buenos Aires without the mention of “the best steak in the world” and “amazing wine”. Of course we were keen to sample these, but we were also interested in finding something else. Maybe all the other travellers and writers had missed something. Had they left a stone unturned? Well, who cares? Once you have tried the steak and wine, other cuisines lose their appeal. Yes, they have some tasty empanadas to ease those lunchtime hunger pangs but it’s the melt-in-your-mouth, cut-with-your-fork steak that has you venturing out with the locals at 10pm.

Here it can be very easy to forget that you’re in South America. Some areas of the city resemble those idyllic little streets of Paris while others are awash with colour and passion as professional dancers take to the streets to tango. It was only as we passed Argentinian football supporters pre-match, or watched political demonstrations in the main square, that we were reminded of our whereabouts: Argentina’s proud capital, full of patriotic heritage and deep-rooted cultural passion.

Valparaiso is a city split in two. You have a rugged working port, home to the Chilean navy, and then you have the hills behind it. Personally I’m not a big fan of most art. During this trip I have been dragged to more art galleries than I would wish to see in my whole life. It was difficult, however, not to have my deeply-buried artistic flare ignited here. The colour of the place, from the houses that line the peaks, to the stairs that scale them, cannot fail to inspire creativity and get those artistic juices flowing… Anyway, enough of that, what about the food?

Well, we didn’t see one plate of rice and beans and we didn’t have to choke down any plantain. In fact, I’m struggling to even remember a single meal we ate. The one thing I do remember was the hot chocolate we had. It was like someone had taken a large bar of Dairy Milk and heated it up to its delightful, liquid form and then poured it into a cup. Girls, I’m starting to understand what the fuss is all about. 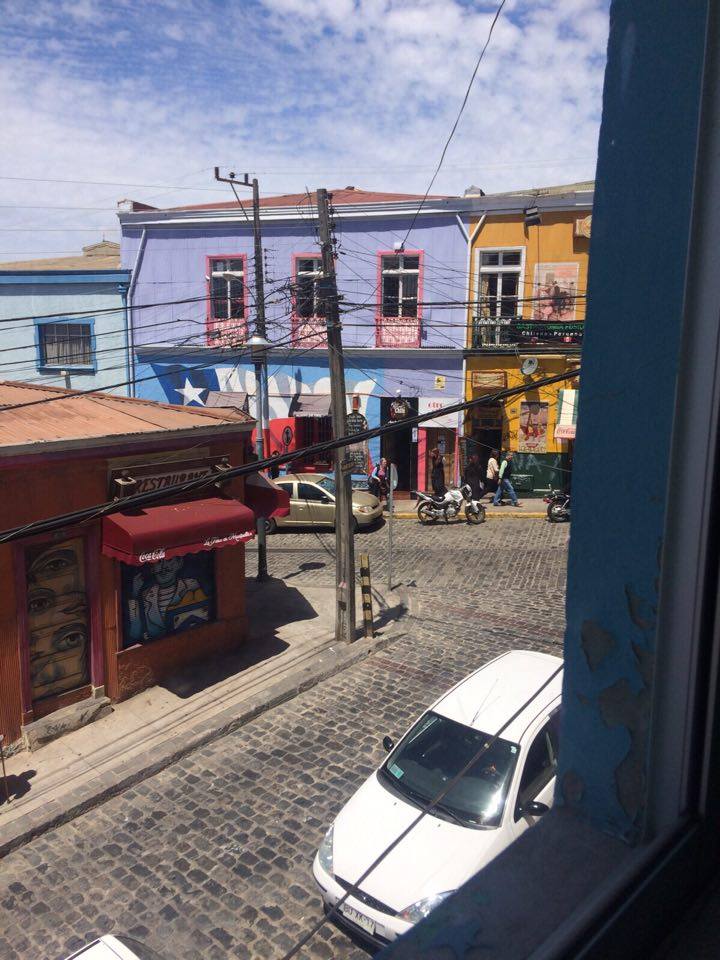 Where in South or Central America would we like to live? Colombia. Where would we live in Colombia? Cartagena. Cartagena is a walled fort town in the north of Colombia. It is situated on the Caribbean coast and is full of Spanish colonial architecture. You can enjoy an evening of people watching in the restaurants that line the cobbled streets, or travel back in time and be dragged around them in a horse-drawn cart. We preferred the former, not being fans of the smell of horses, horse poo or the strong aftershave of the drivers.

Cartagena did not seem to have a particularly distinctive culinary identity. The same can be said for the rest of Colombia if you ignore the three usual suspects (see title). What it does do is embrace the best dishes and food types that the world has to offer: you can go out for a great Italian pizza, or grab some Spanish tapas over a bottle of wine (though Indian food has sadly not yet kicked off). If you want our advice though, buy a bottle of rum from the shop and join the locals in one of the many squares. You can silence your stomach with a freshly grilled kebab, leaving you more time to laugh, chat and dance with all the new friends you’ve made.

This is the city of Christ the Redeemer, Sugarloaf Mountain, Friday nights in Lapa and the yearly Carnaval, so we had high expectations for this place. We were not disappointed. Minutes after touching down at the international airport you are hit by the traffic, pollution and favelas, but it is hard not to fall in love with this metropolis. Whether it’s walking the streets of Santa Teresa or lounging with a caipirinha on Copacabana Beach, there really is something for everyone!

As for the food, like any capital city there is a range of good international cuisine if you really do want to stay away from those pesky rice and beans! Our favourite was a chicken restaurant just off the beach in Copacabana – a Rough Guide tip-off – a likely product of Brazil’s Portuguese heritage. 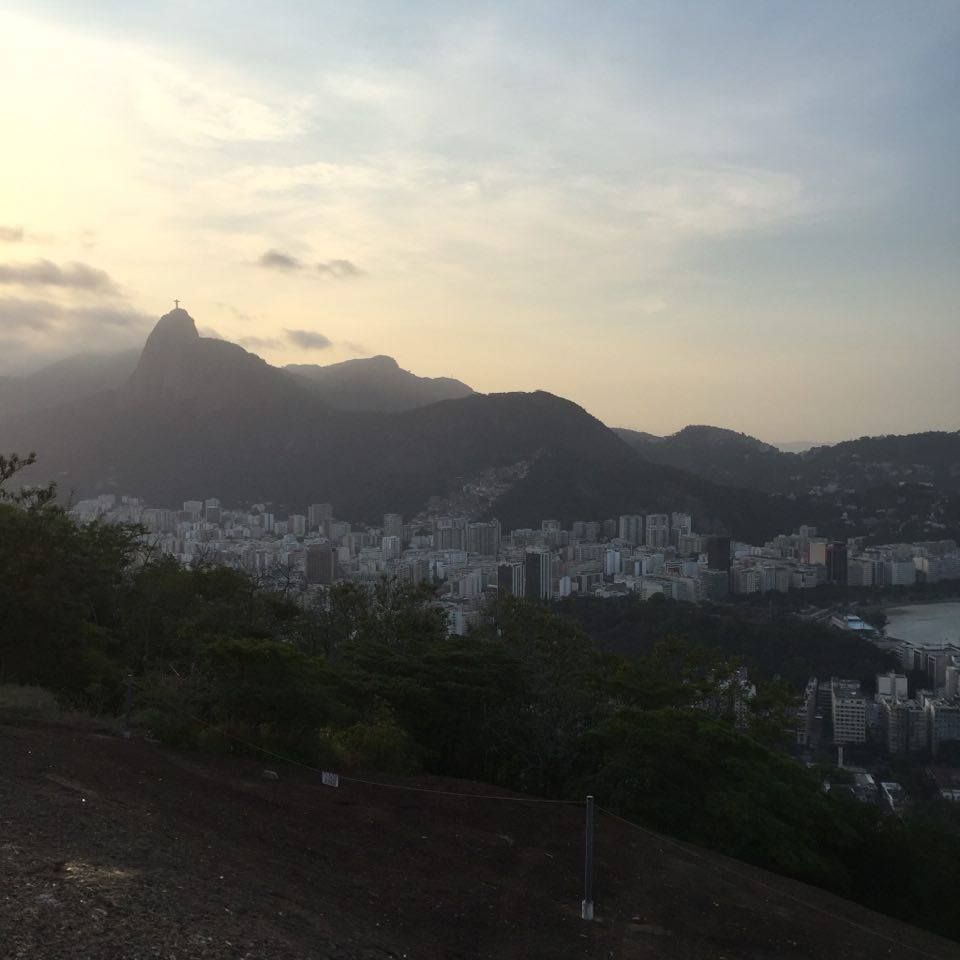 Practically on the Panamanian border lies this sleepy little beach town of Puerto Viejo, and although it is a huge surfing destination, there is plenty to do for non-surfers like us. We hired bicycles and cycled the 13km to nearby Manzanillo, passing many beaches and eateries along the way. One standout place for us was the imaginatively named Puerto Viejo Bakery, just outside of Puerto Viejo, serving fresh bread, cakes and delicious drinks. Our other days were spent relaxing and sunning ourselves in the town, and of course eating and drinking along the way!

Bread & Chocolate was another cafe we frequented a couple of times, and my god was it good! Soon the time came for us to move on to San Jose and after several days we were sad to say goodbye.

After spending a few days in the backpackers’ paradise of San Juan del Sur, we started to doubt that we would ever meet a local Nicaraguan! For this reason, and for everything it has to offer, it was time to move on to Isla de Ometepe. The biggest island in Lake Nicaragua, it is dominated by twin volcanoes, and is made up of a smattering of small villages & towns.

We stayed in two separate areas of the island and rented a moped to drive between the two and visit the hot springs and small national park. We also visited Cafe Campestre in Balgüe, which had great coffee, cakes and curries (excuse the alliteration). 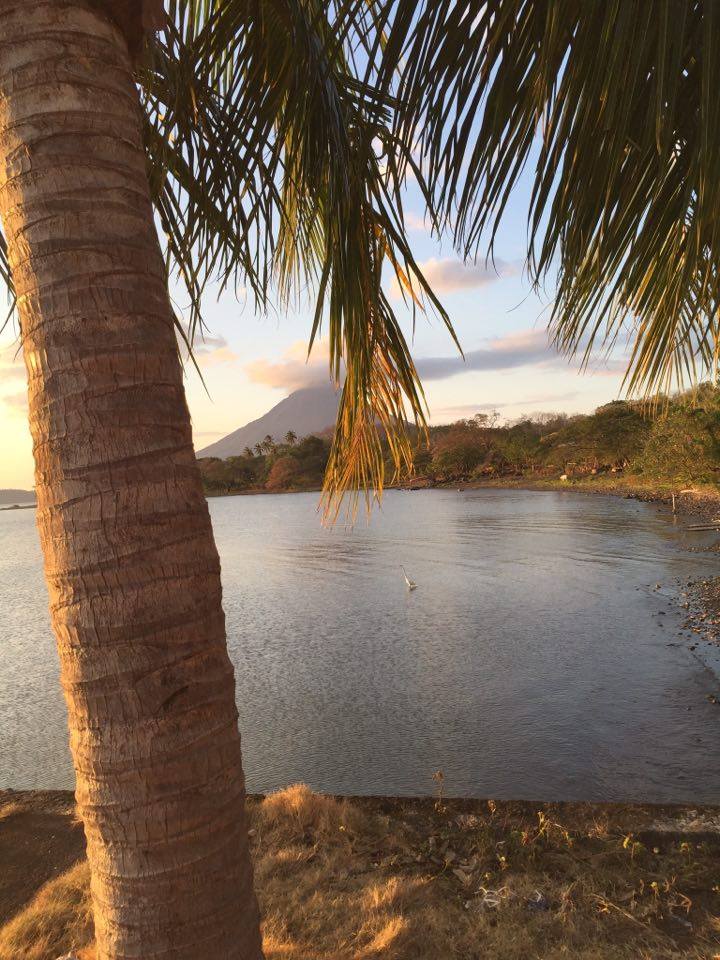 Lake Titicaca, bordering Bolivia and Peru, is the highest navigable lake in the world and Copacabana is the main town on the Bolivian side. Our out-of-town hostel, La Cupula, was a bit of a splurge for us, but with its outdoor hot tub and pet alpacas it was definitely worth it! The views of the lake were spectacular, especially at sunset accompanied by a lightening storm, where you can see across to Isla del Sol, another nice day trip from the town.

Bolivian food so far had left a lot to be desired and the local fish of Lake Titicaca had left our stomachs rumbling…. But then we tried the hostel’s restaurant. Cheese fondue and quinoa salad finished off with a bottle of red wine in the outdoor hot tub – not bad at all! Lunch’s meagre fish dish was but a bitter memory! 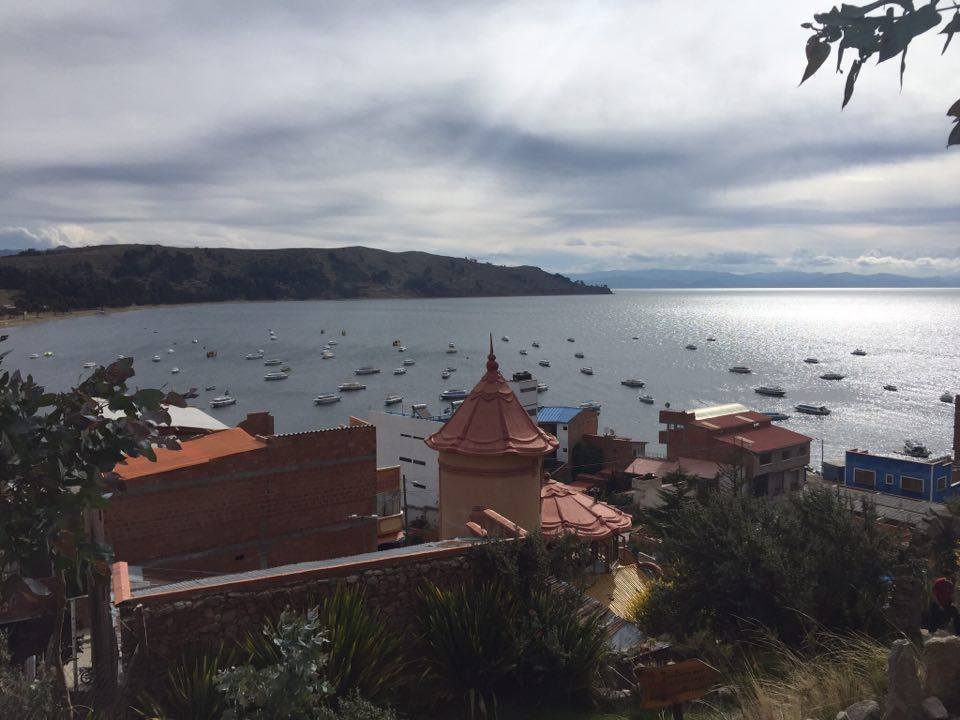 You could spend several years in this diverse country and still have an appetite for more. Peru has beaches, desert, jungle, cities, and, of course, mountains, which are home to the Inca trail. The starting point for this: Cusco.

During a tedious (but free) walking tour we learned/remembered one fact. Cusco is shaped like a jaguar. Armed with this useless knowledge and already tired of physical activity we set about trying just about every local dish we could get our hands – sorry, forks – on. Peruvian food has been replicated in hundreds of restaurants around the world, and for good reason. It is by far the most distinctive cuisine in Latin America (in our humble opinion). We loved the lomo saltado and ceviche, and every meal was accompanied by a pisco sour.

There is some debate between Chile and Peru over who can claim the pisco sour. All I can say is that if Chile did invent it, Peru perfected it. Apologies to any Chileans out there but that touch of egg white is a game changer: Peru wins for us.

Alas, for every Mila Kunis there is a Susan Boyle. Peru’s Susan Boyle is the culinary aberration known as leche de tigre. With limited Spanish I can only imagine this means inedible fishy milk… If asked whether  I’d rather take this dish or run with the bulls, I’d take the horn up the bum every time!