Set “several years from now” in the arid and desolate sertão of the Northeast of Brazil, Bacurau follows a hodgepodge community of social outcasts living in relative harmony. We have DJ Urso (Jr. Black) announcing the village events through a microphone with the slickness of a radio presenter, Domingas (Sônia Braga), the local doctor who helps the villagers cure their hangovers, and Plinio (Wilson Rabelo), the schoolteacher, who treats his students with grandfatherly gentleness.

From the get-go, however, Bacurau is shown to be under threat from the outside. Everyone hides inside as the sleazy, suit-clad mayor, Tony Jr. (Thardelly Lima) literally dumps a truck-load of books in front of the school in a cynical attempt to persuade the citizens of Bacurau to vote for him, and to take his ominous sounding “retinal scan”.

Even more disturbing is the group of mostly American and British tourists camping outside the village under the leadership of an old and domineering German man, played by Udo Kier. Kitted out with military equipment, vintage weapons, and a drone shaped like a UFO, they fantasize about “hunting down” the villagers of Bacurau, as though they are taking part in some sort of absurd package holiday, as a means to satisfy their bloodlust. 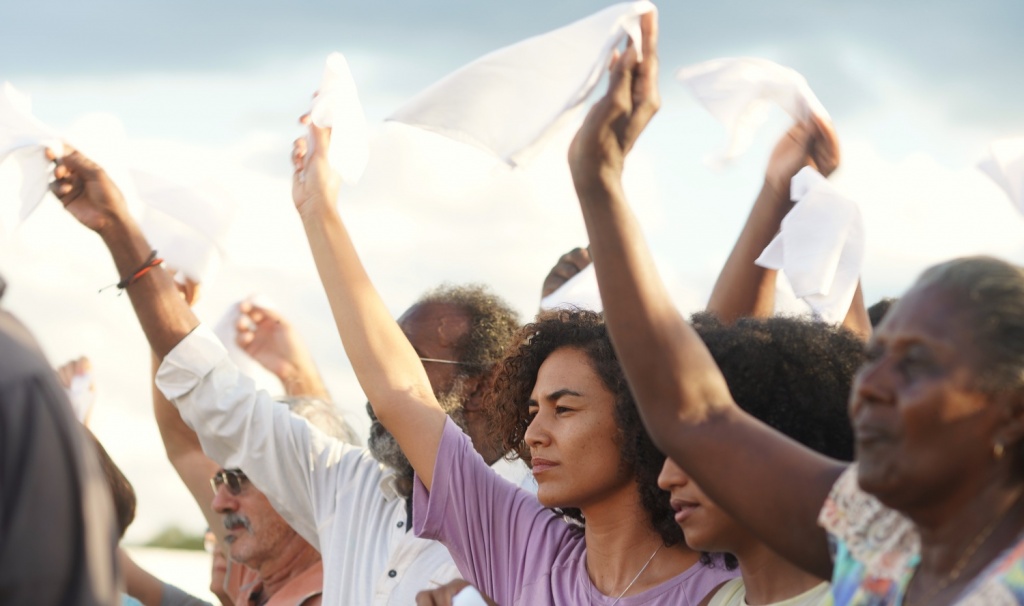 While set in the future, Bacurau tells the age-old tale of post-colonial exploitation, rendered possible through the complicity of corrupted Brazilian politicians. Yet it couldn’t be a more crucial time for this story to be told, with Brazil’s president Bolsonaro continuingly opting for a divisive and discriminatory rhetoric, expressing his desire, for instance, to “exploit the Amazon region with the United States”.

Bolsonaro has also made attacks on the Brazilian cinema industry, by recently slashing funding of audiovisual productions by 43% and suspending entirely the financing of films with LGBT+ themes. The success of Bacurau in Brazil, attracting so far more than 600,000 spectators, can itself be considered an act of resistance to the troubling obscurantism touted by the country’s populist president.

Despite its damning political commentary and dystopian elements, this film refuses to simply show us a dire and bleak image of things to come. The genius of Bacurau is its ability to imagine a community that thrives because of its warmth and inclusivity. Within the village, transgender and homosexual people are treated with equal respect, as each citizen has their role to play in the community’s resistance. As described by co-director Juliano Dornelles, the film is like a “pulse of energy”, something much needed today both  in Brazil and across the world.

Bacurau is due to be released on the MUBI streaming service early next year. Watch the trailer here.