Alfredo Jaar´s A Logo for America was originally presented on an electronic billboard in Times Square in 1987. It challenges the commonly erroneous ethnocentrism of the USA, habitually claiming the identity of a whole continent. America is not synonymous with the USA, as anyone who has spent time in America, or with Latin Americans, should know. The piece is simple and obvious, and works towards de-Latinising Latin America.

Art in America magazine noted the parallels of Damián Ortega´s Tortilla Construction Model (1998) with a perishable scale model of a modernist apartment. Perhaps I wouldn´t be so specific, but the clean, modern urban construction model could definitely be seen to be trivialised into a brittle and tasty snack. The irony is that the building (model) will easily break and crumble, but maize remains the most important and sacred food source in Mexico. I found the piece original, skilled (how many tortillas snapped in the process?) and entertaining. 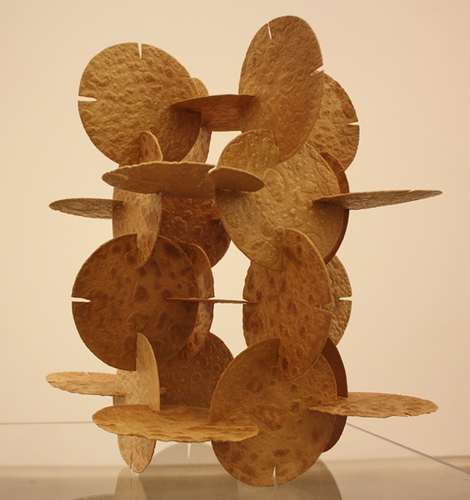 Similarly ContraTiempos is a projection reel of images taken by Runo Lagomarsino, showing cracks in the concrete of Ibirapuera park in São Paulo. The shape of these cracks have an undeniable similarity to the South American continent. The process of construction and decay is also reflected here, perhaps depicting efforts towards modernity, without the real process of modernisation.

I liked the simplicity of these works, as it emphasized how without intention, they are weighted with history and metaphor simply because of their origin, especially when exhibited either in the U.S. or the U.K. They can be seen for what they are: kooky curiosities, beauty in everyday objects; or they can be interpreted through a grand history of mythology, colonisation and (in)dependence.

Wilson Diáz´s pieces contrast the uses and perceptions of the coca plant. Colonial and Indigenous Names of the Coca Plant are printed using ink from the coca seed, alongside a commercial green neon sign reading MOVEMENT OF THE LIBERATION OF THE COCA PLANT. This piece is necessary. It is bold and eye-catching yet inoffensive. Again, the appearance is simple- bold typography- but the demonising prejudices and misunderstandings are highlighted, literally, and counteracted by showing how art can be made from the ancient medicinal plant. 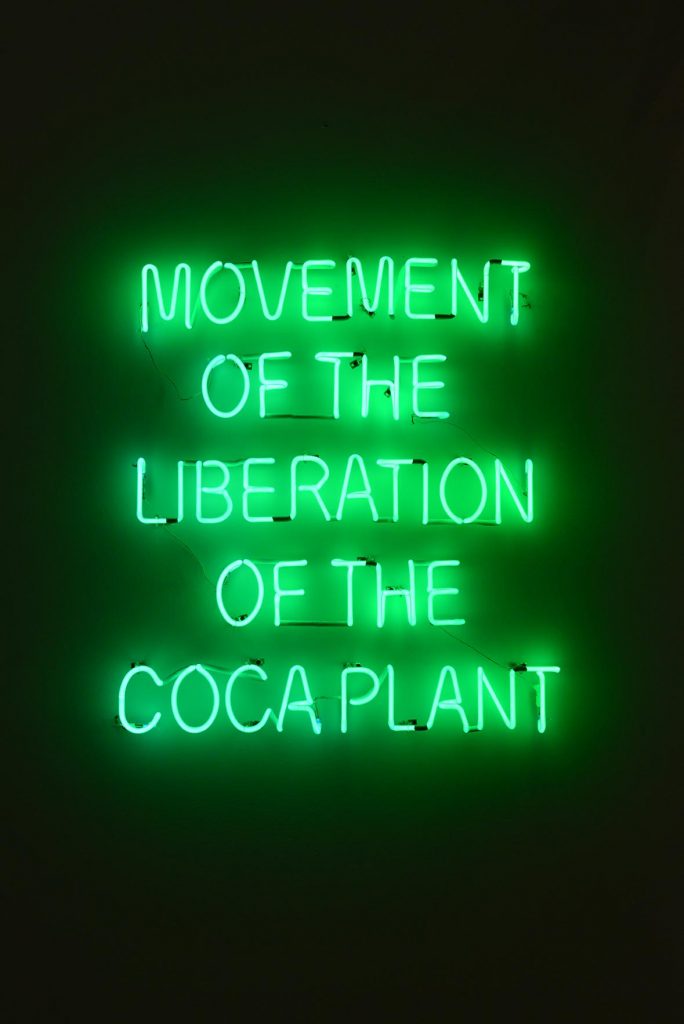 Carlos Amorales’s construction is a large, suspended instrument made of cymbals, with mallets available for the viewer to become part of the piece. The question seems to be centred in how people will use the instrument. After this, We´ll See How Everything Reverberates. Rules are not given but will be created, and we´ll experience what resounds and resonates. Without needing to say too much, through this objective we can contemplate the governing of Latin American nations and their stories from inception. (All nations for that matter.)

Following the exhibition upstairs, you will find a textual piece, with posters for you to take, detailing a Brief History of U.S. Interventions in Latin America Since 1946. One side of Motta´s piece outlines the interconnected narratives in orderly, printed text (clean, objective fact!) whilst the other depicts two bloody handprints and the Mano Blanco death squad symbol from El Salvador (depicting the violence viscerally, appealing to sentiment).

I enjoyed the simplicity of the exhibition. For those who know little about the continent, questions will be posed as certain facts are illuminated and perceptions opened. For everyone, the exhibition offers a chance to giggle, to play, to scold and to rethink.

On this note, I’ll leave you with Marta Minjuín’s letter to McDonald’s regarding her plans to build an iron replica of the Statue of Liberty and install it lying down in New York’s Battery Park, a dormant icon awaiting revival. Visitors would be able to enter the sculpture and traverse walkways inside it. On the tenth day of the presentation, the artist proposed to stage a huge free lunch for the public, during which McDonald’s employees would ascend fire truck ladders and plaster the statue with hamburger patties, which would then be grilled by flamethrowers.  This is the awfully courteous reply she received… 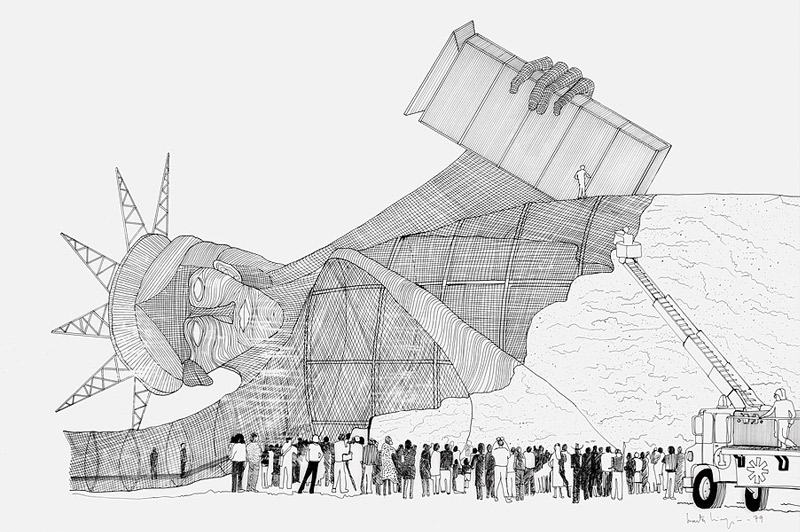 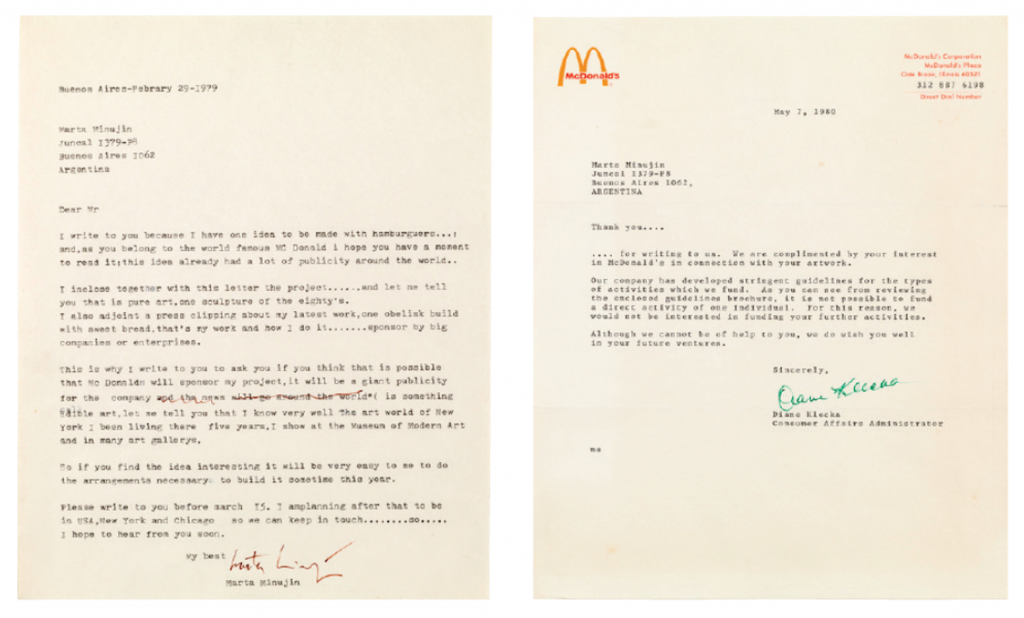 “As you can see from reviewing the enclosed guidlines brochure, it is not possible to fund a direct activity of one individual. For this reason, we would not be interested in funding your further activities.”

On the 26th August, the public is invited to trace back the African roots which have influenced Tango music and dance style in Dom Pedro´s 2013 documentary, featuring musical performances and interviews.
South London Gallery, 7pm