The Popemobile pulls up on Colombian turf

Written by BristoLatino
Posted on October 9, 2017

Pope Francis touched down in Colombia on the 6th September, where he spent four days visiting the country and its people. Charlie O’Connell, who is currently working for national newspaper El Tiempo, reports.

For British people, it’s pretty difficult to understand the importance of the Pope in Colombia. The UK is not a Catholic country, nor is it particularly Church of England. A recent survey carried out by Brierley Consultancy concluded that by the year 2020, only 25% of the British population will identify as Anglican, the UK’s main faith. A colleague here in Bogotá even described England as a ´godless country´, and to be honest I couldn’t agree more. The closest figure we have to the Pope is probably the Queen, but even then, the excitement Brits feel about the Royal Family is nothing compared to the passion Colombians showed when the Pope arrived. 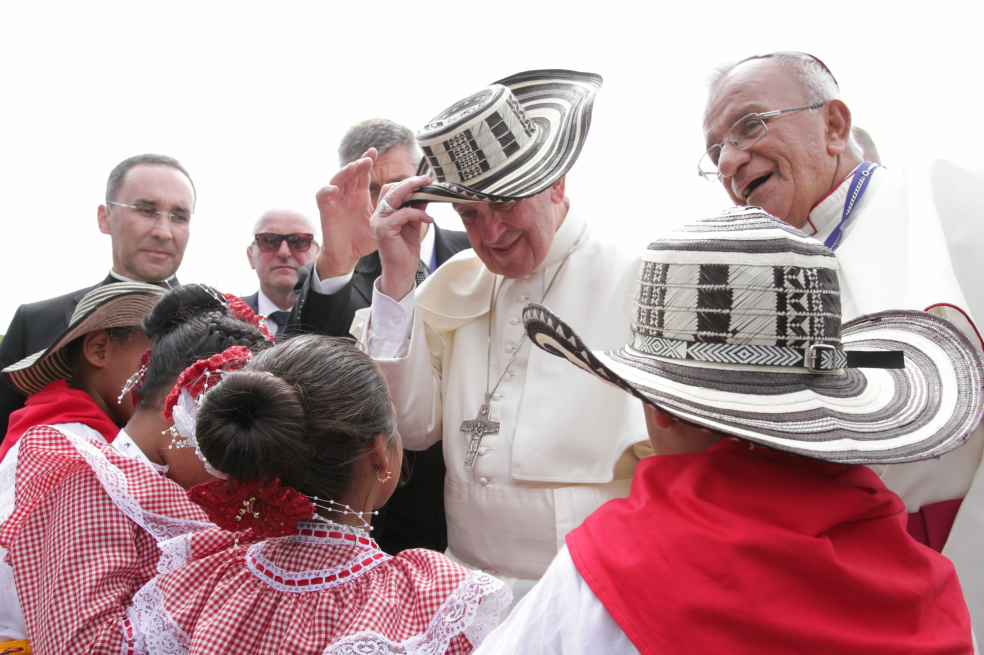 The Pope is greeted with a traditional sombrero vueltiaoX by children in Cartagena. Photo: Nelson Cardenas- Presidencia

Even a month before his arrival, the Pope’s visit has been the main topic of conversation: which roads will close? Will we be getting a day off? Will we get a chance to see him? Bogotá was pulling out the stops to welcome the Pope, posters and billboards featuring the smiling Pope appeared everywhere, sometimes with a happy-looking nuclear family (and on occasions a puppy for good measure). Medellín, arguably the most Catholic city in the country, even declared him ‘illustrious son of the city’ (in English… which resulted in many memes being made). Public transport was also decked with welcoming messages: ‘Bienvenido Papa’ was emblazoned on every Transmilenio bus (and still is, more than 3 weeks since his departure). As my first time in Latin America, let alone Colombia, this was quite an introduction.

The excitement was tangible on the day of the Pope’s arrival in Bogotá. People were queuing up on the main road to the airport a whole 6 hours before he was due to land in the capital. When he finally did come zooming down the Avenida el Dorado, everyone went mad. It was an incredible sight to witness. El Tiempo had live coverage of the Pope’s visit, and some people even clapped when the plane landed… 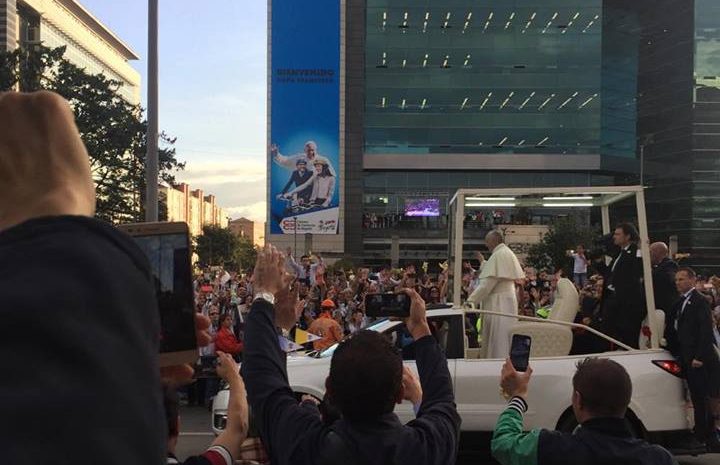 Charlie captures the moment alongside others as the Pope passes the Camera de Comercio de Bogota.

Its fair to say that we English just aren’t passionate in the same way—the only thing which I could possibly relate this excitement to was teenage girls queuing up to see a One Direction concert. But during the days of the Pope’s visit, I must admit I really felt I was a part of history in the making. The last time a Pope had visited Colombia was in 1986 with John Paul II, so this was a big moment. Arguably much bigger than the last holy visit,  given that Colombians got to encounter their first Latino Pope.