JR’s boarder-spanning picnic has turned the forgotten Mexican city of Tecate into a place of pilgrimage for peacemakers. Art editor, Beatrice Murray-Nag reports.

The city of Tecate in the Baja California state of Mexico has become evermore present in the public eye since president Trump uttered the words ‘border wall.’ The divisive proposal would see the city enclosed in on its northern side, with the construction supposedly splitting it from Tecate, California. Yet the French street artist JR has had his eyes, quite literally, on the city’s border for other reasons. His latest installation saw the artist install a pop-up picnic table over the existing fence that separates the neighbouring countries, along with an open invitation to come and share in the experience. From the top of the table two eyes gaze up hopefully towards a future in which the nations can live in harmony. 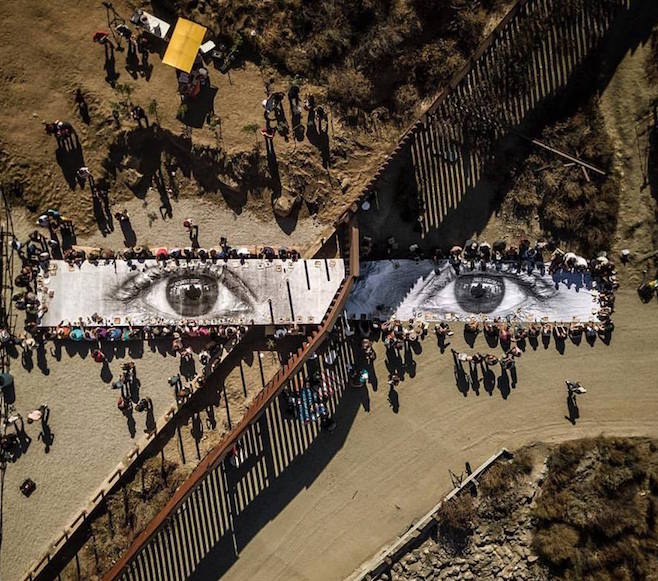 On the day of the 24-hour installation, people from both sides of the fence crowded around the temporary table to break bread together, and share the food and sunshine that the day had brought them. With half of the event’s own live band on either side of the partition, the picnic party was a picture of unison.

“People eating the same food, sharing the same water, enjoying the same music, all around the eye of a dreamer,” explains the artist. “We forgot the wall for a minute.”

JR’s ‘dreamer’ is likely named in honour of the 800,000 DACA ‘dreamers’—undocumented immigrants who arrived in the USA illegally as children. Thanks to former US president Barack Obama, the young immigrants received protection from deportation along with the right to work, yet Trump has been on the brink of abolishing the agreement. Rather too coincidentally, JR’s ‘open to all’ installation coincided with the White House delivering a whole list of hard-line immigration measures in exchange for any deal to protect the ‘dreamers,’ many of whom attended the picnic.

Whilst one might think that the polemic picnic would be quickly shut down by security guards, the officials’ response was quite the opposite. A video released on the artist’s Instagram page even shows JR clinking a cup of tea with one US federal agent through the bars of the rust-coloured fence that stands tall on the border. The artist describes the man as an ‘angel,’ making his project possible despite its controversial concept.

The picnic celebrates the demounting of the first work JR installed in the northern Mexican city, a larger-than-life monochrome child, peering over the wall from Tecate into the US. After five months of knocking on doors in the city to find the perfect spot for his work, JR met the family of Kikito—local toddler and eponymous subject of the work. When posting a picture of his piece on social media, the artist publicly shared its location, in turn turning the forgotten town into a place of pilgrimage for peacemakers.

With his work, JR hopes to inject a spark of humanity into the immigration debate. By encouraging people to physically travel to the border, meeting and talking to people on the other side, his works spur communication and set out to make harmonious cultural exchange much more than just a dream. 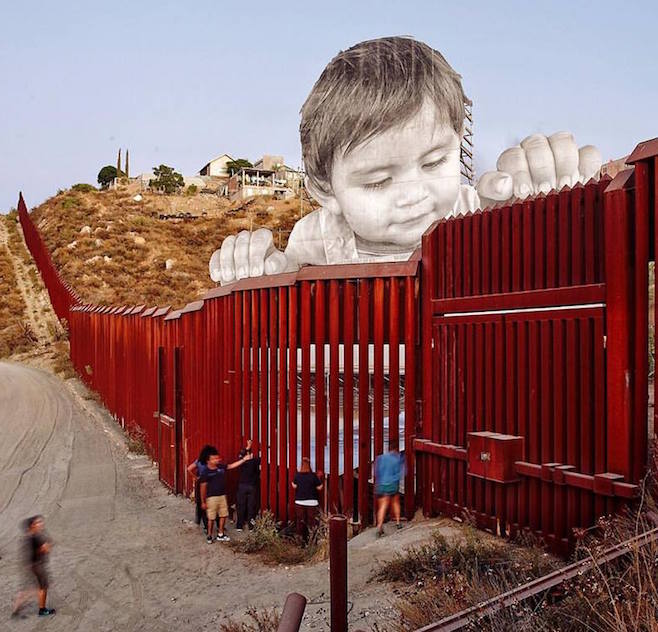 For the last 10 years, I have been working in conflict zone, jails, borders and I always found an « angel » that helped us make the impossible possible … The picnic today was clearly forbidden, and yet it was not shut down. It’s always worth trying 👁 📷 Roberto De Angelis & Tea by @miamaestro