Currently interning at Bogotá newspaper El Tiempo, Rebecca Wilson writes about the shock of the Colombian ‘No’ vote to the historic peace deal from the ground

I woke up tired, but excited. And hopeful. At 3am on a disturbingly quiet Saturday night (the ‘ley seca’ came into play at 6pm, meaning no one could buy or consume alcohol until 6am Monday morning), I read through the terms of the agreement in a cartoon pamphlet put together by various peace organisations.

I read through the responsibilities of demobilised fighters: reconstruction in areas most affected by the conflict; reforestation of land that has been destroyed; commemorating and offering apology to victims by taking collective, public accountability for crimes; location of bodies and remains of victims, alongside destruction of illicit crops and other community obligations.

The agreement would also provide an opportunity for any other fighters to come forward and plead guilty to their crimes, or simply give up arms and join the peace process, taking on the same tasks and receiving the same benefits as the FARC.

“The cost of financing 7000 disarmed guerillas following the given arrangements (90% of the national minimum wage for 2 years), is equal to that of 7 days of war”

The financial figures shocked me; the cost of financing 7000 disarmed guerillas following the given arrangements (90% of the national minimum wage for 2 years), is equal to that of 7 days of war. By this figure, essentially, ‘No’ supporters are willing to fund a war which costs the tax payer and the government 7.6 billion pesos a year, has cost 220,000 lives in its totality, and left thousands displaced, as opposed to pardoning the FARC and working to establish a unified society, with more funds available for rehousing, education, health, and culture. And these funds would not only come from ceasefire, but from international investment. The EU pledged to provide over €575 million in support of Colombia’s post-conflict and peace building efforts. This money could be used for reparation and support of victims.

Reading through the terms, I worried for the ex-guerillas; although we must all act to repair our crimes, to rebuild what we have destroyed, I feared that throughout this process of integration they would be under strict supervision, under scrutiny from the public, and consistently victimised. I promptly envisioned the emergence of a new class, a new race, outcast, to be discriminated against and what revolution this could then lead to. It was going to be rocky and challenging. But the chance may have been lost.

Although it had flaws (reparation and integration measures, presentation of ex-guerillas, and patronizing acknowledgement of military and police crimes), it was clear that these four years of negotiations were extremely fruitful, and that arguments were rational and fair. It seemed to me that if the FARC had actually agreed on these terms, then there would be no way the public wouldn’t.

10 out of 268 seats in congress, in which FARC members may contribute verbally but will have no vote, to me represents a huge sacrifice and willingness to cooperate on the part of the FARC. They want to be taken seriously in the political setting. A coalition government (which this is barely close to) presents society with more space for justice. To clarify, in using this polemic word, I mean to express a reality of fairness. No, it does not bring justice to victims to see their family members’ abusers in a position of political power. But better this than in violent power? What’s more, the chance of the FARC winning an election and establishing a communist society is not only slim, but also far away. Only in two mandates’ time would the FARC have had the opportunity to enter office. And they would have to be elected.

With this in mind, the following day, with the sun out and a bounce in my step, I approached Colegio San Agustin. Ice cream vendors rang their bells and voters filed through with family and friends. I followed the ramp down to the auditorium where groups of young dancers were warming up. It was a national dance competition, which at first seemed to be held on an inconvenient date, but soon came to symbolize strength, unity and healthy competition. There was so much energy invested into every move. They were fierce, resilient and unified. And they received huge support from the crowd, with screaming friends in scattered groups around the theatre. It was moving. These teenagers were determined. They were urban and feisty and had spirit. There was salsa playing in the streets as I left the competition for El Tiempo; couples and families clustered in restaurants, picking at fried fish, or sharing platano chips on the street. A group of giggling friends passed me taking a (surprisingly modest) selfie. I felt optimistic.

In the office it was tense, I refreshed my screen a hundred times to keep up with the result. There was hardly a percent difference in the divisions. More than 62% did not cast their ballot. There were heads held in hands, no tears, no groserías. Just simple, true disappointment. 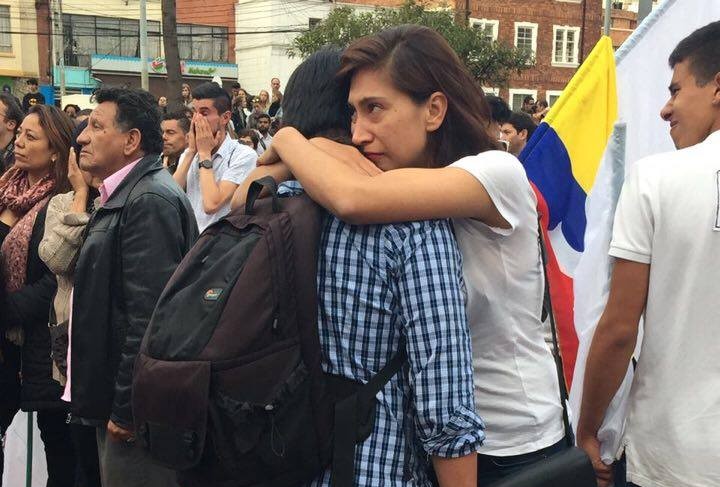 AbrazNo: Colombian’s mourn the result on the streets of Bogotá

Regardless of who is ‘right’ or ‘wrong’, peace is what everyone hopes for. The fact that the FARC, a violent, powerful political group, have agreed to put down their weapons is a sacrifice. Imagine living for 10 years outside of society, with only those of the same ideology, living in nature, fighting for what you believe in. Imagine that your commitment to both your beliefs and to peace for your country leads you to agree to give up your weapon, to give up your way of life and give up your relative freedom, to integrate into the society you have fought against, risking quotidian judgement, discrimination, perhaps humiliation or violence. There are many dangers. There are many risks. But the FARC and the government were willing. Some were even willing to plead guilty and put themselves up for trial.

The problem many had with the accords was not about peace, but the lack of benefits for victims. They perceived the agreement as a clear gain for the FARC and the government, but with little consideration for affected citizens. But there would have been support; from the International Centre for Transitional Justice, from the UN, from Norway. There would have been a specific governing group in charge of the peace process. No, it may not have worked, but after 52 years of war what more can you do but try?

I would implore people to think of their children. I understand many fear a future communist dystopia, but do they want their children to grow up in the same state of war as they did? Whichever way we vote, there is a high chance of other fighters mobilising, regrouping, and seizing control of narcotraffic, but we have to start somewhere, not just continue down the same streams of blood and tears. One group disarming is progress and courage.

‘No’ supporters want an improved agreement. They want reimbursements and security. But they may have extinguished discussion. Political accords will never accommodate everyone. For utilitarian prosperity, we sacrifice.

Watching ‘No’ supporters celebrate disheartened me. I can understand feeling satisfaction (as my taxi driver home told me he was feeling) or relief, but actively cheering and embracing over the result that things will remain in a state of instability and hostility I find terribly bitter and limiting.

Pardon signifies closure and acceptance. It is potent and constructive. Instead, the public has chosen to hold on tight to their pain and not allow it to be released, nor accept it. This seems to me a willing self-torture. The willing self-torture of an entire country. Bojayá voted ‘Sí’, Pradera voted ‘Sí’, Briceño voted ‘Sí’, Tibú voted ‘Sí’. In South Meta, in a municipality considered as the heart of the conflict, 93.56% voted ‘Sí’. In Chocó, over 79% of citizens voted in favour. That regions so deeply affected by the conflict seek to end this war fills me with hope. If they are ready to pardon and move ahead, then we all are.

Sadly there is no posguerra yet. There is the hope of a young generation with dreams bigger and more important than revenge and limbo.

Although I believe this referendum failed, as did that of Britain in June, I still believe these 4 years of negotiations will not be wasted, and that their efforts have brought the country closer to understanding how to repair its wounds and construct (and divide) a nation.

Disappointment is easier to deal with than rage. There is less anger amongst the FARC, more power in the government and divided emotions of the public. If the ‘Sí’ had won, aggressions would be sparked, and Santos would have to please a divided, hostile nation. Let’s hope his government will continue to negotiate so that this country can finally take a step forward; into the unknown, but into the light.