Written by BristoLatino
Posted on April 25, 2015

Claudia Posada-Fawcett was fortunate enough to attend legendary Cuban musical group Orquesta Buena Vista Social Club’s farewell tour. She recounts her highlights, and tells us why she thinks the reach of Cuban music will only widen.

Whilst enjoying some pre-concert sushi in Cloudy Bay, one of the Royal Albert Hall’s restaurants, I had the thrill of overhearing the spectacular voice of Omara Portuondo, warming up for the upcoming Orquesta Buena Vista Social Club’s ‘Adiós’ tour that took place on Easter Sunday. The tour marks an official end to their 16-year career, which has seen more than 40 musicians come and go.

The Buena Vista Social Club, a name that derives from a member’s club in Havana that closed in the 1940s, was born after American guitarist Ry Cooder’s trip to Cuba in 1996. He and Cuban bandleader Juan de Marcos González gathered together a group of celebrated local musicians whose careers had ended decades previously following Fidel Castro’s rise to power in order to record an album in EGREM studios in just six days. The project came to be hugely successful and received international recognition: the first album, named after the band, earned a Grammy award in 1998. In 2003, it was listed 260th in the Rolling Stone magazine’s The 500 Greatest Albums of All Time.

“It was a kind of club by then. Everybody was hanging out and we had rum and coffee around two in the afternoon. It felt like a club, so let’s call it that. That’s what gave it a handle.” 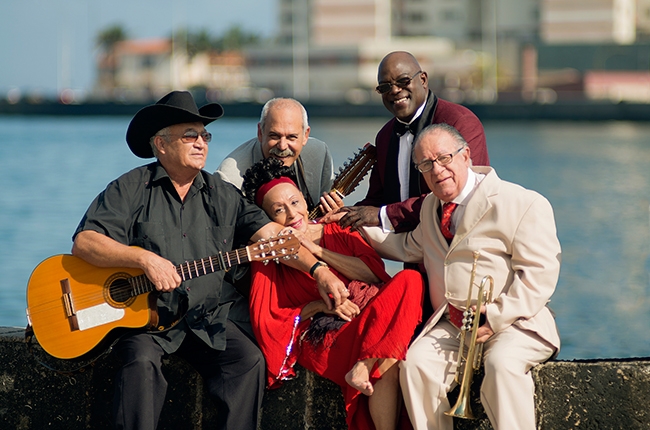 For the duration of the concert, projections of former members of the group occupied the backdrop of the stage, including a host of fantastic clips and photographs from the likes of Afro-Cuban singer Ibrahim Ferrer, pianist Rubén González, and guitarist and singer Compay Segundo. However, we were still able to witness live the talent of some of the original musicians: lute player Barbarito Torres, trumpeter Manuel ‘Guajiro’ Mirabal, and singer Omara Portuondo all featured. Portuondo received a standing ovation for her rendition of “Veinte años” amid raucous applause. 84 years of age, still full of style and seemingly not harbouring any inhibitions, she danced enthusiastically with another of the Cuban musicians to the great excitement of the crowd. The overwhelming atmosphere in the spectacular Victorian venue was joy, and a mutual enjoyment of Latin music.

A personal highlight was at the end of their repertoire, when the audience were stamping their feet and chanting “¡otra, otra!” (another, another!). Returning to stage to a storm of applause, the group launched into one of their most famous tracks ‘Chan Chan’, the opening song to their first album and one that I grew up listening to. It was not long before the entire cosmopolitan audience was on their feet.

In the last two weeks, advancements in Cuban-American relations have signified a move towards repair, hallmarked by a handshake between Cuban president Raoul Castro and US president Barack Obama. In contrast, the founder of Buena Vista, Ry Cooder, was prosecuted and fined $25,000 by American authorities for his collaboration on the project at the time of its creation, having broken the ‘Trading with the Enemy Act’. It is therefore timely that the Adiós tour of Buena Vista Social Club coincided with the opening up of Cuban-American relations, hopefully paving the way for further promotion of Cuban music, so it may be appreciated internationally and by all generations.