Some might argue that it is a bit late in the day to be writing a review of Ondatrópica’s debut album, seeing as its international release was over a year ago. In January 2012, Frente Cumbiero’s Mario Galeano called upon the well-known English producer Will Holland (better known by his alias Quantic) to launch a new musical project. The plan? : “To re-interpret the tropical musical heritage of Colombia with new approaches in composition, arrangement and production in (the) classic and mythical setting” of Medellin. No mean feat then. The project was, however, in safe hands; Galeano and Holland proceeded to gather Colombia’s finest musical talents, all having been influential players in Colombia’s music scene at varying points during the last 60 years. The 42 musicians involved hailed from a rich breadth of different styles and traditions, including Michi Sarimento, Fruka (of Disco Fuentes fame) and Anibal Velasquez.

As the name suggests, Ondatrópica provides a new wave of tropical sounds, firmly rooted in traditional Colombian styles whilst inspired by modern music genres of international origin. In an attempt to rediscover a dying craft, Galeano and Holland insisted that each track on the album was an analogue recording, minus heavy post-production. The resulting instrumental and vocal sounds are rich and raw, effortlessly evoking the live music culture of the South-American nation.  Despite this old-school approach to production, Ondatrópica’s sound remains remarkably edgy, akin to all musical offerings from Quantic and Frente Cumbiero. A project that could potentially have resulted in a confused and overreaching soundscape, in fact produces a masterful meshing of old and new; cumbia, salsa, porro and gaito, meet hip-hop, ska, funk, beat-box and dub to form a truly unique musical tide that swells beyond the boundaries of genre (if you’ll excuse the extended wave metaphor). 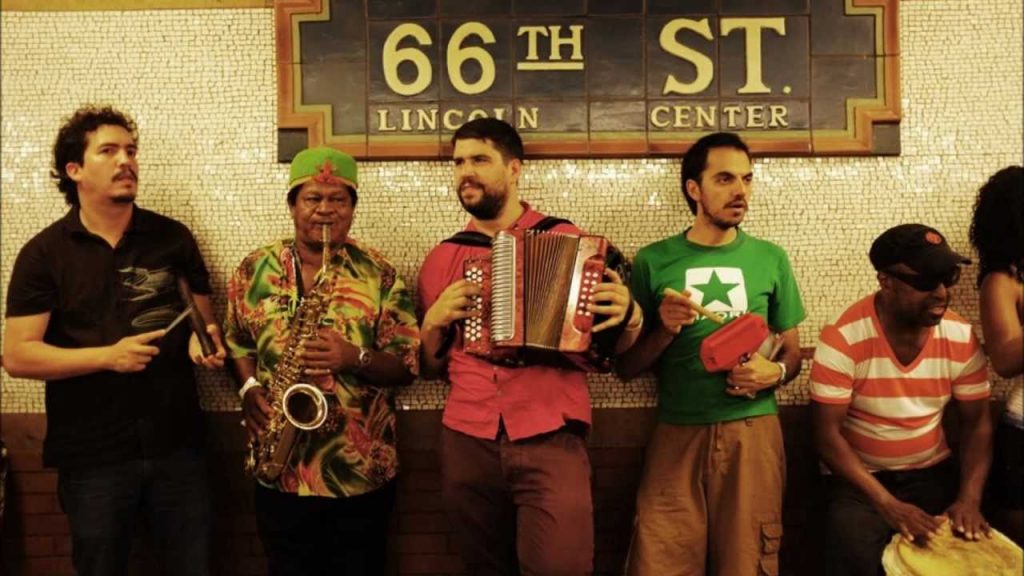 A listen to the album’s principle tracks aptly demonstrates the musical and stylistic dexterity dished up by the musical super-group.  Tienes sabor, tienes sazon has all the makings of a classic, which it has arguably already become. The classic cumbia sentimentality is complemented by a seriously funky bass line, rich sounding brass instruments and the wonderful whine of singer Nidia Góngora (this sounds disparaging, it’s not—Góngora has a delicious emotional quality to her voice). On Suena, French-Chilean rapper Ana Tijoux spits flowing bars over yet more brass and a host of instruments that evoke a playful street fiesta. I Ron Man displays once again the playful nature of the project, with an alternative take on Black Sabbath’s Iron Man, complete with compulsory wailing Colombian singer in the introductory bars. Put simply, this album is a lot of fun. I will warn you in advance; it is so much fun that you will want jump on the next plane to Colombia to lap up the atmosphere en vivo.

But what, you ask, inspires such a belated review? This summer saw Ondatrópica’s first European tour, which introduced me, along with many other European listeners to the band. With a style so invested in live sounds, I was incredibly intrigued to see whether the band would be just as impressive, technically and stylistically, as the pre-recorded album promised. One of their headline UK dates was at Glastonbury festival, along with a plethora of top-class acts. Ondatrópica, however, was undoubtedly the most shining set of the weekend. Playing in mellow late-afternoon sun, they had half a field of raucous dancers, half a field of relaxed onlookers soaking up the insatiably positive atmosphere they whipped up with their maracas, drums and energetic performance. Minus a reliance on reverb, loopers and other electronic tools, Ondatrópica offered something up at Glastonbury that, despite attesting to old methods, felt incredibly refreshing. The focus fell simply to singing, strumming, playing and (naturally) dancing; the air of pretension that accompanied other performances at the festival was nowhere to be found amongst the salsa-dancing crowd. Unfortunately not all 42 contributors were present, but it was certainly not underwhelming. Although, I expected no less from the finest musicians in Colombia.